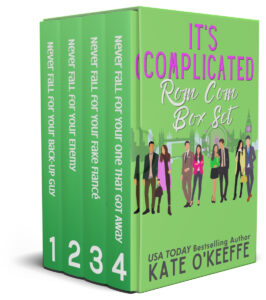 The complete series! One story picks up where the previous story leaves off, so you can binge read all of them together in one box set!

NEVER FALL FOR YOUR BACK-UP GUY 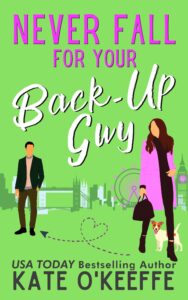 I’m the queen of dating disasters—I’ve had more rotten dates than you can shake a long stemmed rose at. After years of one disappointment after another, I’m beginning to feel like I’ll never say “I do.”

So after being dumped one too many times I do something stupid:

I make a pact with my best friend Asher. If neither of us are married by 35, we tie the knot. That’s five full years of searching for The One.

Except when I take a job redecorating Asher’s bachelor pad, I realize he’s a lot different from the guy I thought he was. Against all odds, I find myself falling for my best friend. Maybe my back-up guy could be The One after all?

Except there’s only one problem…

My back-up guy has a secret that could ruin everything.

NEVER FALL FOR YOUR ENEMY

Rich. Over-privileged. Smug. The guy’s far too good looking for his own good, and he’s always got that smirk teasing at the edges of his mouth, telling me what he thinks of me.

And now, my worst nightmare has come true.

Charles Cavendish has moved into my building which means I can’t avoid seeing him everywhere I go. He’s always there, judging me, especially when I come in late at night. Hey, I can’t help it if my “single American girl in London” writing gig means I’ve got to check out every new club in town. Charles is so tightly wound he goes to work before the birds have chirped their first good morning.

He needs to loosen up. Live a little. Actually, I don’t care what he does, just as long as he does it nowhere near me. Because I hate him with the heat of a thousand suns. And I always will.

Only now I’m stuck in an elevator with him.

What’s the worst that could happen?

NEVER FALL FOR YOUR FAKE FIANCÉ 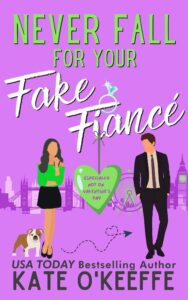 One thing I’ve learned this Valentine’s day is that fake fiancés should remain just that: fake.

Pretending to be engaged to James Brody, the hot, single London deputy mayor who graces gossip columns, is just a business deal. Nothing more. I’m his appropriately demure fiancée that makes him look like he’s not the playboy the media thinks he is, and he’s my ticket to getting my pushy mum off my back about not being married and producing her two perfect grandchildren.

What’s more, while we’re pretending to be engaged, I can spend all my time trying to capture the real prince in my fairy tale. The guy I’ve been in love with forever.

The problem is, I’ve started to enjoy being with James on our fake dates and public appearances. And, if I’m being totally honest, with his tall, dark, and handsome looks, he’s pretty easy on the eye, too.

And then there’s that kiss we shared that took my breath away. Yeah, that.

Sure, I know it was for an audience. I know I shouldn’t read anything into it. I know he’s kissed more girls than I’ve had trips on the Tube. But the heat in that kiss can’t be fake.

Nope. This is a business deal.

Only the deeper I get, the more I realize someone forgot to tell my heart that.

NEVER FALL FOR YOUR ONE THAT GOT AWAY 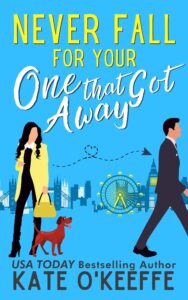 If life gives you a second chance with the one that got away, should you take it?

Noah Grant was my first. He was the guy who went from childhood friend to teenage love. The guy I spent one heady, intoxicating summer with, only to have my heart snapped in two—not by him, but by me.

Work throws us together, and there’s no avoiding him, even if I wanted to. And I don’t want to avoid him, although I know I should.

But Noah’s hiding something. And if I let myself get close, could his secret break my heart all over again?

Available from Amazon, or read it for FREE with Kindle Unlimited.

What people are saying about the It’s Complicated Rom Com Box Set:

★ ★ ★ ★ ★ “If you’re looking for something with great vibes, amazing friendships, insane chemistry, AND romcom vibes then you’ll definitely enjoy these books..” – Goodreads reviewer

★ ★ ★ ★ ★ “This is a very fun, sexy, engaging and highly entertaining set of romantic adventures that had me laughing and crying… enjoyed this box set from beginning to end..” – Amazon reviewer

★ ★ ★ ★ ★ “For a good time, there’s nothing better than curling up with a Kate O’Keeffe box set of binge-worthy stories! These stories are so much fun to read that you’ll devour them in no time and realise that book hangovers are real!.” – Amazon reviewer